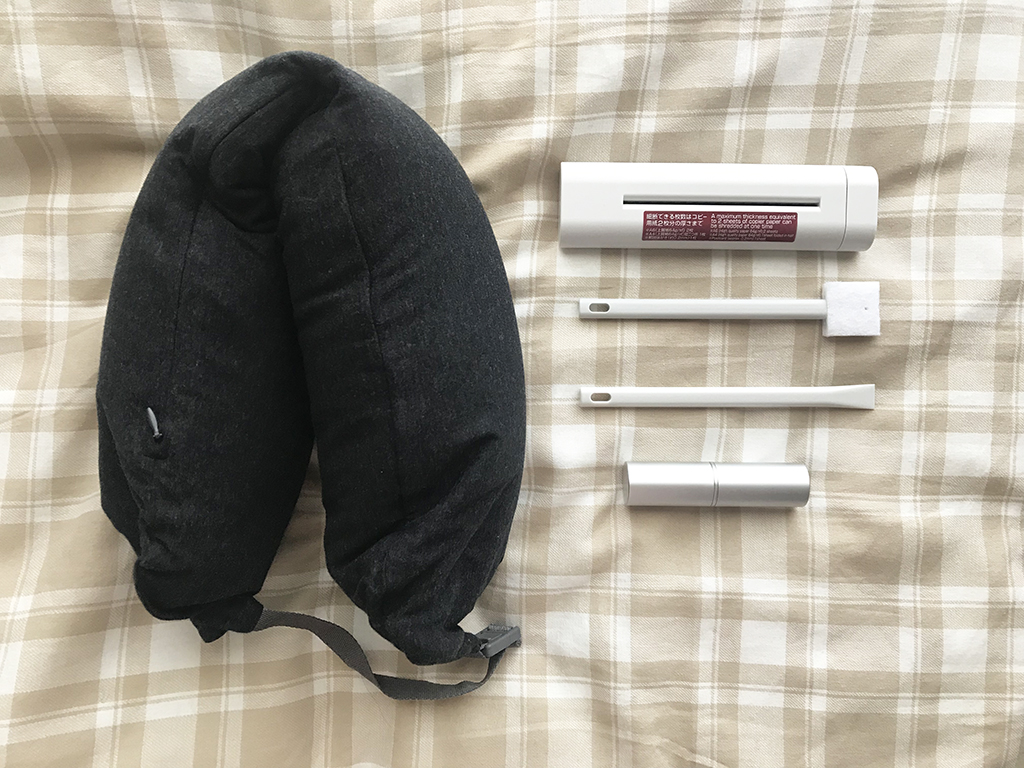 I love Muji products for their overall aesthetically designed and good quality products. They had another sale recently so I dropped by to check if there was anything that I could buy. In the end, I got myself a neck pillow, a paper shredder, a makeup brush, two cleaning tools, a nail oil, 2 glass containers, and a portable lint roller.

Muji neck pillows are really popular for their size and comfortableness. I actually have a neck pillow but it takes up so much space and doesn’t really do much for my poor neck when I travel. But Muji’s is so soft and portable. The price isn’t that expensive either (during ). There were several colors that you can pick from but I chose the black one for neutrality. They also sell the covers only in case you want to change it.

I’ve been wanting to buy this paper shredder for so long. I got sick of tearing delivery labels by hand from the boxes that I receive through online shopping. I also cleaned my documents last time and had to struggle tearing a lot of paper apart. This paper shredder saved a lot of time and effort. The only downside would be the size. It can only shred maximum two pieces of paper in one go with a width less than 11.4 centimeters. But I mainly use this for tiny delivery labels, so that’s not a problem for me.

I’ve been using a cheap makeup brush from Daiso so far and decided it’s time to get an upgrade. I went for the travel size one since it has a cap so I can keep it clean longer compared to my old brush that just sits in the open collecting dust. This way, I can also longer the time for when I need to clean my brush. I was pleasantly surprised when I touched the brush. It’s super soft on the skin!

This is probably one of the most unexpected item. Haha. I actually forgot to include this in the header picture. It’s a super small lint roller.

I had a huge problem with lint collecting on my coats and hat when I traveled last time. So when I saw this item on sale, I had to get it. The size is so small that it’s smaller than the palm of my hands so maybe it’ll only be useful for small items. Cleaning coats would probably be a bit hard with this. They sell special refills for this, too.

Next is my lifesaver for winter, a cuticle oil. My cuticles have been really dry recently because of winter and they started peeling off to the point of it being unbearable. I tried searching for cuticle oils in Amazon but it was kind of pricey so when I saw Muji had one, I decided to get theirs since it’s cheaper. It has a nice citrus scent, too.

I saw this on discount as well and figured it might be useful to organize my cotton pads. I usually just keep it in the box it came with but it never shuts close completely so dust always enters. With this, the problem is solved!

I don’t know why it’s called soda glass… Is it only Japan’s way of saying it? Anyways, I’m using it to hold my loose tea bags since they’re not individually packaged.

And the last item are these cleaning tools! They were only 80 yen each, which is cheaper than Daiso. They released the cleaning series recently and received a lot of positive reviews in the websites so I decided to give these guys a go. My sink looks disgusting right now so I’m thinking of using the sponge one for the edges that are difficult to reach. The scrapper is there … to scrape.

That’s it for my mini haul! I hope this would be useful reference for some people who are thinking of buying these products.