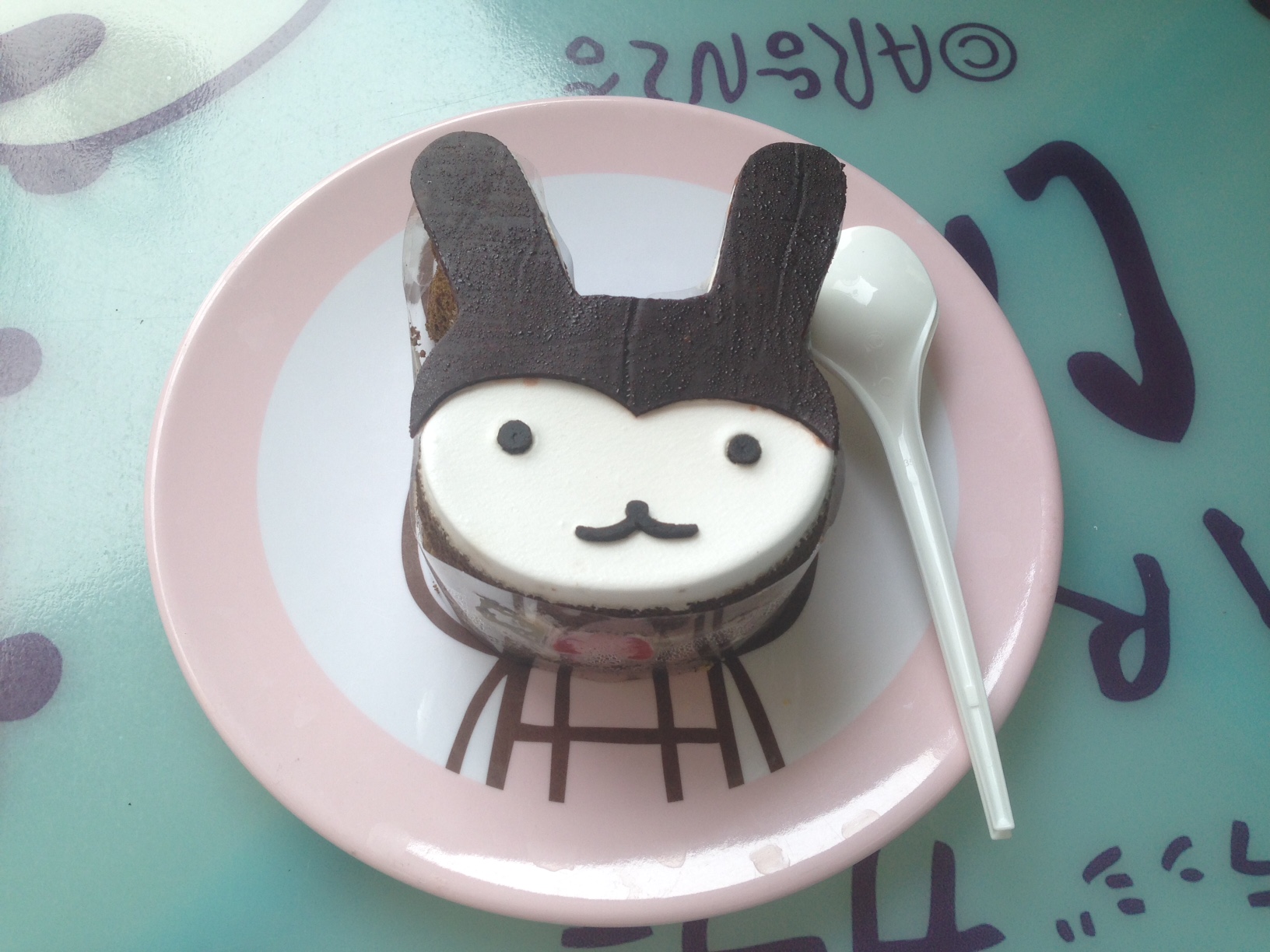 I just set up my own new bank account today at the local office near my house. It felt like it took forever for my turn to come and to end the process. I didn’t actually finish the process, though, since the entire block suddenly had a blackout. I was unable to get a picture of myself and my signature taken. So the staff told me to come back tomorrow around the morning or the afternoon. Oh well, at least I don’t have to wait in line again.

Me and my mom then went to the mall. My brother decided not go join since the electricity was back on again. We went to Aranzi Cafe because I’d always wanted to go there before it went under renovation. The stall has been renewed now. And they have added several more items to their menu.

Mom decided to try a new type of cake she haven’t tried before. We decided to share the cake so mom told me to order another item from their new menu. I was really captivated by their kakigori (lit. shaved ice), so I asked the staff which kakigori was famous among the customers. She pointed out the Panda Milky Crunch which consists of shaved oreo, vanilla ice, mini brownies, and marshmallows.

The shaved ice was enjoyable, they’re actually pretty nice when half-melt. However we didn’t have a nice time devouring the cake since the fruits they used were really sour. My mom chocked on her first bite, and she immediately told me to get rid of the fruits. I tried to taste them first, though. It certainly was sour I can’t stand it. 🙁 Too bad. I guess their green tea and chocolate mouse cakes are still far way better than this one. 😛

We went to the SOGO department store just to check whether they’re having clearance sale discounts or not. I then spotted that Elle handbag that was being discounted for fifty percent. I took the bag and showed it to my mom. I guess she fell in love on the first sight and purchased that bag for herself. Boo. If I had some money I would’ve bought that bag for myself, too. Well, it doesn’t really matter though. I could just borrow the bag from her when I need it.

I was actually looking for a medium sized backpack since my old one which was made from leather was having a breaking down process. The leather are getting peeled off little by little and it’s only a matter of time before it finally got broken. I’ve asked my mom several times before to look for a cheap backpack but neither I or her had the time to. So when she spotted a simple parachute-material backpack (again discounted for forty percent), she immediately bought it for me.

It was a really simple backpack. It has four different colours available; red, navy blue, black, and fuchsia. I chose the red one because it’s the brightest of them all. Lol. Aside from having a big space inside, it’s also waterproof! 😀 I think it’s pretty durable, too. I’m planning to use that backpack for my school field trip on the 21st of October. Yay for flashy backpacks!

We ended up spending around $70 for the handbag and $42 for the backpack. It’s a pretty nice deal!

We had ramen and gyozas at Sushi Tei for lunch. It was the first time for us to eat at that restaurant. Mom had always wanted to eat there but never had the chance to do so since it’s always crowded during dinner. It was not so crowded when we came so mom said why not.

When we asked for the bill, my mom was quite shocked when she saw that the one registered was salmon gyoza instead of the chicken one. The salmon costs two times the price of the chicken, which explains the expensive bill. Mom then complained to the waitress. However she said that she didn’t misheard our order and insisted that we ordered salmon from the very start. I was pretty confused as I was pretty sure what I ate tasted like chicken, not salmon. And let me stress that it was definitely chicken. The waitress kept insisted otherwise. I could only roll my eyes. I’m never going back to that restaurant.

We had homemade potato wedges as our dinner. My mom tried to make a replica of potato wedges in the restaurants that I loved using the remaining potatoes we had at home.

With only salt, pepper, parsley, and rice flour, mom made potato wedges that — in my opinion— surpassed the ones in the restaurants! She then fried them for several minutes, and it was done.

Well, aside from the Sushi Tei incident, I have to say that we really had a good time today!