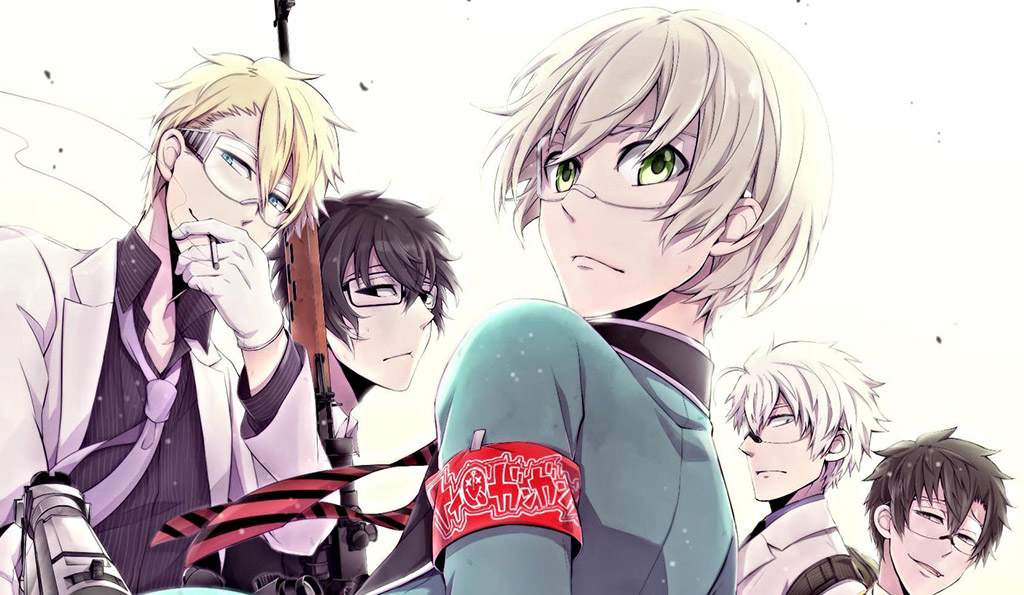 This season’s anime has gone halfway through! Though there may not be many that I found interesting, I still have several titles that always made me excited! There were also several that I dropped halfway because I just didn’t feel like continuing it … But let’s just focus on the ones I really love!

First off is Aoharu x Kikanjuu! The official english title on Wiki is Aoharu x Machinegun. This is absolutely my favourite series of this season. The story revolves around Tachibana Hotaru, who is a bonafide girl but was always mistaken as a man by others. She’s a character with a great sense of justice. Hotaru was then forced to join a survival game team, Toy Gun Gun, by Matsuoka Masamune (who didn’t know that Hotaru was a girl) after she accidentally destroyed his work place at the host club. There, she met Yukimura Tooru, Masamune’s childhood friend, who was a sniper in the team (and also an S&M manga artist).

The plot then moves pretty quick, and some of the boys’ past were revealed. It then triggered Tachibana’s will to keep staying in the team for the sake of helping Masamune take his revenge on a certain person, even though girls were actually not allowed.

It has a total of twelve episodes and it has reached episode 7 so far. I can’t wait to see the ending!

Next is a round of romance! Akagami no Shirayukihime was originally a manga created by Akizuki Sorata. I read her manga a long time ago, but it has a slow update speed so I kinda dropped it after some time. When I heard that the anime was gonna air this summer, I immediately added this to my “Absolutely watch” list!

This anime has a nice clean art and pure romance. I love how the characters were depicted in the anime, and of course the prince is not the only thing that keeps me watching! I also love the side characters because they all had their interesting sides, especially Ryu, Shirayuki’s mentor.

Well, this anime basically has bijin inside it. A charming white haired prince, a brave red haired ‘princess’, cool bodyguards, and somehow a shyboy! Though I doubt it will catch up to the manga, I’ll still continue watching this anime to the very end.

This is the only anime which has no particular genre other than comedy and slice of life. But it’s really soothing and pleasant to watch! The main character is Doma Umaru, a beautiful, cute, and good-at-everything high school girl. She, however, switches into her otaku mode once she gets home and lazes all around her room. She tries to keep her secret of having an otaku life from her friends. The only one who knows Umaru’s double personality is Taihei, his older brother.

Even though this show is not as funny as Gekkan Shoujo Nozaki-kun, it’s still one of my favourites! (I really love Umaru’s cutesy o w o)

And that ends my top three favourites! I didn’t include Durarara this time because this second cour isn’t as exciting as I expected to be. Maybe I’ll continue watching it when the third cour comes out next year!

Alright, and a new list of anime that I’ll probably watch when fall comes: