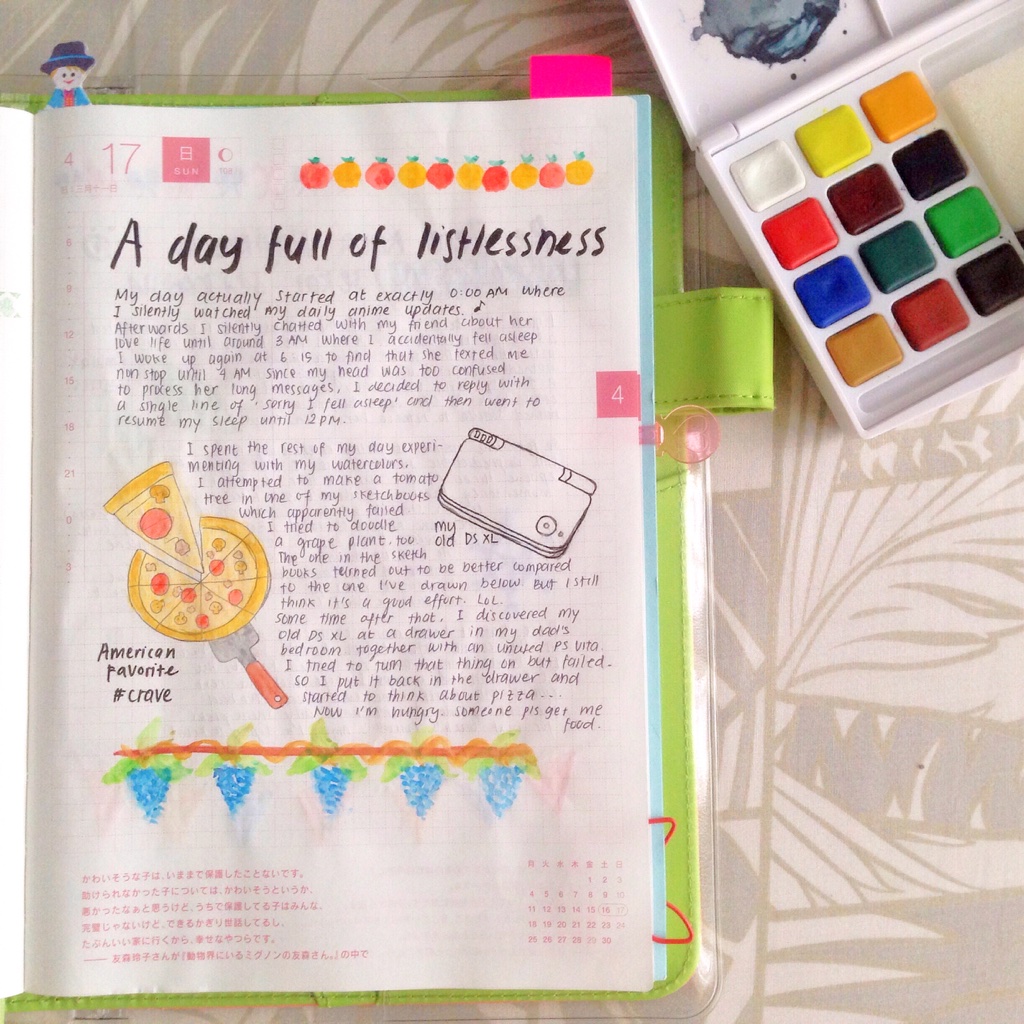 Nothing eventful has happened ever since the end of the end of the national exams. I’m literally free from school right now so I’ve been doing nothing else other than lazing around at home watching anime or attending my Japanese language course.

All I’ve been doing for these past few days are filling up my daily Hobonichi planner and playing with my new Koi Watercolors set that I bought secretly two weeks ago (psst). I also decided to get a new A6 sized Hobonichi cover (the one I had was A5) named ‘Cast’ for my future mini portable planner. Yes, another reason to waste money.

Kiev also ordered the same cover. Yay for matching planners! Our order just got shipped today. It’ll probably take two weeks or more for it to reach our hands. Sigh. The wait is always killing.

Mom bought me makeups even though I’ve never even once wanted to use them, especially lipsticks. Ugh. She also bought me a Pigeon branded compact powder for teens. There were many shades to choose from but she picked the ‘Gold’ color because she thinks it’s more suitable for my skin color. I was just … meh, because I’ve never used those kind of things before.

She got me a nice new and cheap shoes, though. (I’m sure it’s bound to be broken soon enough. Lol.) We saw it on a bazaar stand that was inside the mall after we bought the cosmetics. I’m pretty pleased with the design as well. Moreover, it’s  wedges and not high heels! God bless the shoemaker. There were two colors available, khaki (which looks more like a beige, but khaki was written on the box) and black. I once again chose beige because I don’t fancy black for wedges. Also, those patterns on the shoes looks better on the beige color compared to black. Maybe I’ll buy something black for my footwear in the future …

I guess there’s nothing else I need to say other than sorry for not consistently posting in this blog. Lol. I’m too consumed with filling my planner with my daily thoughts which in turn made me neglect the existence of this blog. Sigh.

1 reply on “ An update after some time ”