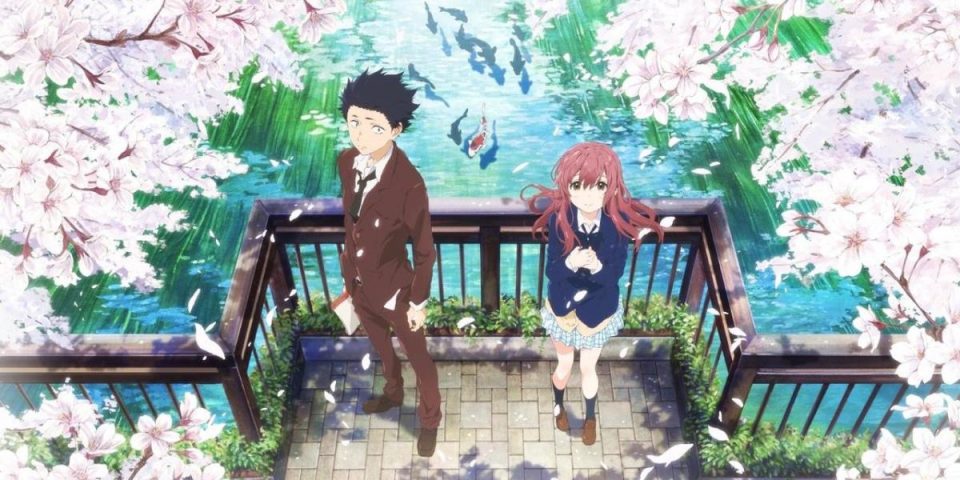 Warning: This post contains spoilers. Please read at your own risk.

Ah, I’ve been wanting to watch this movie ever since they released it last year! Now that I’ve got the chance to, and watched it, I truly feel that movie is a masterpiece of its own. I fell in love with the story, characters, music, development and the beautiful ending. Basically, everything in the movie was really well done. Of course, the movie’s not perfect, it has its own flaws, but it still left a great impression (and feels)!

Koe no Katachi is a very powerful movie about redemption, regrets, friendship, and family. It revolves around the two main characters, Ishida Shouya, who was once a bully, and Nishimiya Shoko, the one being bullied because of her inability to hear.

When Ishida started to bully Nishimiya, everyone in the class joined in, including his closest friends. But in the end, Ishida became the scapegoat of his friends when Nishimiya’s mother reported to the teacher about the possibility of her daughter being bullied at school. As a result, he became the bullied and was cast out by all of his friends, leading to his depression and him wanting to commit suicide in the very first few scenes of the movie.

Ishida’s suicide attempt was then found out by his mom and she made him promise not to commit suicide every again (by threatening him that she would burn all the money he has gathered for her) and try to live his life better. Ishida promised, but he continued living by not properly seeing and hearing what is around him because he wanted to shut himself inside. This is illustrated in the movie with all the X on the people’s faces around him.

Ishida started to see Nishimiya again because of what he did before he tried committing suicide. He had returned Nishimiya’s old notebook (which was used for communication, as Nishimiya can’t speak properly) as a last ‘deed’ and actually didn’t expect to see her again after. However, after those events, Ishida and Nishimiya started seeing each other more. Ishida now uses sign language to communicate with Nishimiya.

The story progresses and brings all of his old friends together again. Ishida also gained a new faithful buddy, Nagatsuka, along the way by rescuing him from a bicycle thief. (Chubby cute friend, I must say.) He also got to know Nishimiya’s younger sister, Yuzuru, (mistaken as Nishimiya’s boyfriend by Ishida at first) who does her best every day to support her sister.

At this point, Ishida thought he was doing fine with this life of redemption. However, the X labels that had fallen off came back because his old friends brought back the past he wanted to forget about. Kawai, Ishida’s elementary school friend (who is actually not cute at all), started to spread rumors again about Ishida’s past which led him to take a tremendous action to shut everyone out once again. What Ishida didn’t know was that his actions made Nishimiya think that Ishida’s suffering was all her fault, leading her to blame herself for everything that Ishida had experienced.

I think this part of the movie made Ishida and all the viewers of this movie freak out. Ishida and Nishimiya’s little family went out to watch the fireworks display, but when her sister and mother was gone, Nishimiya told Ishida that she wanted to go home suddenly. Ishida was confused but since Nishimiya insisted, he couldn’t do anything and was only able to say ‘see you later’. Nishimiya usually responds with ‘see you later’ as well, but this time, she didn’t.

Yes, because she tried to do the same thing as what Ishida tried to do at the beginning of the movie.

Ishida soon came back to Nishimiya’s house because Yuzuru told him to get her camera. He expected to see Nishimiya at home but the house was dark. He soon saw Nishimiya’s figure standing on the balcony and Ishida panicked so much when he started seeing her climbing the railings to the point he shouted out Nishimiya’s first name, Shoko, for the very first time.

Nishimiya didn’t fall because of Ishida’s help, but Ishida fell because his body shifted forwards when he tried to pull Nishimiya from the balcony, resulting him to fall into the river. Ishida survived because his friends from elementary school helped to pull him out. He was hospitalized after that event but soon regained consciousness and welcomed back by his friends and family.

After all that he went through, Ishida realized that he had never apologized to Shoko and all of his friends yet. So he did. By doing so, Ishida was finally able to drop all the X on people faces and look at everyone directly in the eye. The background song that was played in this scene also got a little louder as Ishida moved his hands away from covering his ears, showing that he is finally able to forgive himself.