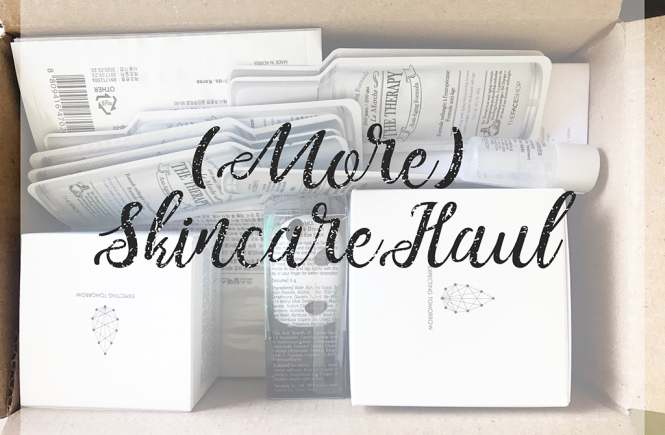 Let me be honest with you. I have been sucked into the black hole of Korean skincare world ever since I tried the Innisfree products. It worked very well for my skin and so I became more and more interested about other products. This haul is the result of me watching too much Youtube videos and browsing Amazon (I feel sad I couldn’t resist the temptation). As you may see on the preview picture below, I have tons of COSRX products that I wanted to try. I’ve heard great reviews for this particular brand and I thought my mom would also love to try some of these, so I gave them a shot. Several other products are from Tony Moly, April Skin and Son & Park.

These serum samples were given to me as a freebie. It’s for anti-aging, so I guess I will just give those to my mom later on.

These are the pimple treatment patches from COSRX. From what I’ve read, they could minimize the appearance of pimples that has already surfaced and suck all that yucky gunk out of it so you don’t need to dirty your hand to pop it or irritate your skin for doing so. Placing this stickers over your pimple also prevents you from touching it and further more irritating it.

I personally am not a fan of Tony Moly products, but I love their packaging because they always create cute designs of it. This one in particular is the Panda’s Dream So Cool Eye Stick (again, the long name). It’s job is to moisturize the under eye area and give it a cooling sensation when applied. It comes with a stick form and it glides easily under the eye. It also has a protective cap to prevent it from drying off.

I’m actually new to this kind of chemical exfoliant product. Until recently I’ve been using the foaming scrub prescribed by the clinic in my country for exfoliation, but apparently, I read somewhere that it’s not effective and actually makes your skin even more irritated. Using chemical for exfoliation works better because it works under your skin, which is what this BHA Blackhead Power Liquid is supposed to do.

I didn’t have any sleeping masks so I thought I’d give this one from COSRX a try. It’s quite popular as well among people. However, not everyone gave great reviews for this particular product. Some said that they experienced little breakouts after using. I’ve done a patch test for this and it doesn’t look like my skin is reacting to it. Hopefully it won’t break me out!

I think I shared the same point of view with most people who heard about snail extract inside a skincare product for the first time: ‘Snail? Ew!‘. That suspicion soon turned out to be raved constantly, though. Snail extracts are proven to be able to minimize scarring and basically heal your skin as a whole. It also helps with wrinkles, so I thought I’d give this to my mom to try later on!

Actually, I’ve read so many great reviews about this product and no one labeled this product as controversial. I called it ‘controversial’ because of the ingredient list inside this ‘Beauty Water’ toner. It contains a bad form alcohol which is denaturated alcohol (usually written as Alcohol Denat.) that can really dry and irritate your skin. (Note that there are good and bad types of alcohol.) But perhaps no one really made a big fuss about it because the alcohol was written at the bottom of the ingredients list, which shows that it’s the least used ingredient. I hope this does nothing bad to my skin, though.

I’ve never tried April Skin’s skin products, but this will be my first time trying out their hair product! I’ve been wanting to dye my hair ever since I graduated high school, but I was so scared that I’ll just end up destroying my already-weak hair if I do it, so I didn’t. This Turn-up Color Treatment is supposed to give temporary color to your hair with treatments instead of bleaching and damaging it. The color will fade after two weeks upon application (depends on how frequent you wash your hair) if you stop using the product, which makes this a great choice for someone who wants to try dye their hair without worrying it will go wrong.

That’s it for the whole haul! I hope you enjoyed reading them as I enjoyed writing about them. I will probably post a specific review for the hair treatment after I use it (I’m super excited and scared, to be honest) as well as a short review on the Beauty Water. I’m not sure if I should post about the COSRX products because there are tons of detailed reviews out there. So yeah,  hopefully these products will turn out great for my skin.  😉