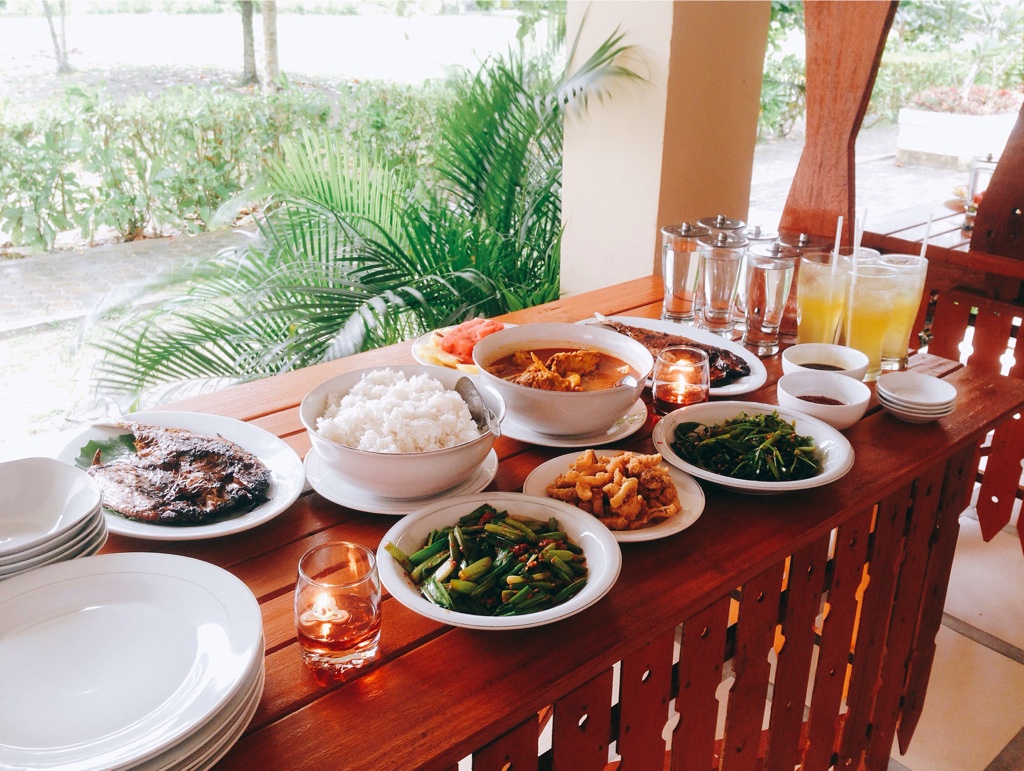 I originally wasn’t planning to post about this trip that I made this summer holiday, but since I really enjoyed the moments that I spent there I decided to make a little review about this tour.

This tour was organised by BelitungIsland.com, a local tour group in Belitung. Our trip lasted for four days and three nights. We stayed in Billiton Hotel and I must say the hotel was a good one in both service and dining with the exception of weak wifi. Lol.

On the first day we arrived, it rained pretty hard throughout the whole day. Most of our itinerary got canceled because of it. However, we did manage to visit Kampong Dedaun, some kind of restaurant and recreation site. We could’ve rented a bike and rode it on the road since it’s mostly one way. Yes, almost all of the roads in Belitung are one way and narrow with rarely any forks or intersections. You’d even be surprised because there’s almost no traffic lights along the road except on certain parts in the town centre, otherwise you’d just drive along the road as if it’s only meant for you to pass.

So anyway, we only got to eat our lunch there whilst protecting ourselves from the blowing wind and rain. The food that they provided kind of suited my taste so I really enjoyed my meal. I’ve never tried their local cuisine before but it’s surprisingly delicious! Almost everyone went for seconds.

The driver then brought us to a nearby beach to take pictures after the rain subsided a bit. The sky was rather dark because it’s almost evening but we still took lots of horrible pics with our faulty phone cameras. The beach had no recreation tools or whatsoever, but it still offered us a pleasant relaxing view of the sea.

We visited several more beaches (there are lots of it here) and then a Vihara. I liked this one in particular because of the pure white sand it has. It may not show clearly in the picture because of my phone’s camera. 🙄 I wish Dad had lend me one instead.

Afterwards we headed to Tanjung Tinggi Beach, the place we failed to visit on the first day due to the heavy rain. One word for this beach, it’s gorgeous.

There are literally humongous rocks everywhere on the beach. There are also some that are immersed in the sea. I kinda regret that I didn’t wear a hot pants since I really wanted to take more extreme pictures without getting them wet. Haha.

It took a lot of effort to climb up the steep and slippery rocks just to take those two photos above. Despite being slippery, those rocks aren’t that smooth so it kind of hurts to work your way to the top of the rock cliff (I didn’t use any footwear). However the view was really worth it! My photos aren’t lot because that place was especially crowded with tourists and people taking selfies. I wish it was more kind of deserted, though. Lol. But I guess that’s just me being selfish.

The most tiring day out of the whole trip. We spent the entire day hopping from islands to islands using our rented little boat. It was scorching out to the point umbrellas and sunblocks doesn’t even seem to help. I kept drinking to prevent dehydration and I constantly stay in shadowy areas because I can’t stand the sting from the sun.

We then arrived at ‘Sand Island’. Actually, it’s not even an island but rather a mound of sand that appears when the sea is tidal. The sand however doesn’t get washed or scattered even after the tides return normal so the little island will always reappear.

I accidentally broke my powerbank by unconsciously stepping into the deeper parts of the water and got my knitted bag soaked and eventually immersed my powerbank. 😥 I was lucky I didn’t put my phone inside my bag as well otherwise it would be the end of me!

The last island that we went to was Lengkuas Island. It’s the most iconic one since it has an old light house built in 1882 by the dutch colonial. The lighthouse is still operational up to this very moment. All of us climbed hundreds of steps just to get to the top of the lighthouse. The view is stunning but I was already too tired to do anything else by the time we reached the island so I took no pictures of it. I’m pretty sure my mom has a few … Oh well.

The night we returned to the hotel, we just kinda dropped dead.

Kaolin Lake was the last place we got to visit before we headed to the airport. It was originally a spot for tin mining. The side effects of the mining then made the water blue. I really find this photo somewhat unreal even though I was the one who took it. Lol. The clouds looked so near to the land as if it’s hovering really close. But the blueish color of the lake still made me amazed. You don’t get to see this kind of view anywhere else! I was happy the driver decided to make this our last stop for the trip.

All in all I found the trip really entertaining even though quite tiring. The beaches are beautiful and not tainted like the ones in Bali. It really saddens me when a natural beauty of a place gets destroyed and neglected by others. I really do hope Belitung gets more visitors and renowned but could maintain their preservation as well!