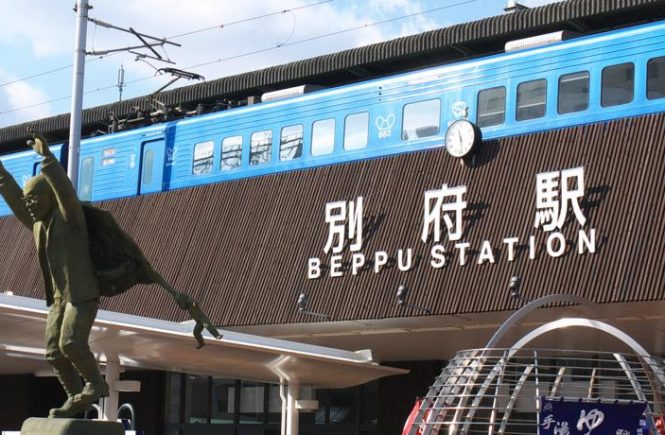 The Japanese class I took this semester offered the students a mini tour around Beppu Station once every month. It was a voluntary activity and the ones who participate and wrote a report on it will receive a bonus point for their Japanese language grades. At first, I was reluctant to join because we had to pay 500 yen (call me stingy) for the participation fee and get up early in the morning (yes, I’m lazy, I know). However, some of my friends who have participated it said it was worth it and that I should try joining as well.

And I have to say it was really worth it as well. So this time I’m going to review some of the places that we went to. Not every thing that was mentioned in the tour will be mentioned here. So if you’re interested, give the tour a try when you come to Beppu!

This bald man is probably one of the most iconic person in Beppu. His name is Aburaya Kumahachi, self-proclaimed as Pika-pika Ojisan or Shiny Uncle (Hint: see his head). He was the person who made Beppu famous of onsen and tourism in the old days and was still looked up as the Father of Tourism in Beppu nowadays.

Our guide, Hirano-san, told us a lot of things about Aburaya and how this statue contained a lot of details and meaning behind it. The pose he made was a ‘landing pose’ showing that he just landed from the sky. If you look closely, there are two oni children sticking to Aburaya’s mantle. They also became the famous tourist attraction icon in Beppu, the Jigoku Meguri. You can’t really see clearly from here, but the mantle had an onsen icon. His necktie (also unclear), had a crucifix, showing that he was a Christian.

On the side of the monument, there is an engraving:

This showed how big Aburaya’s love for tourism was for the city of Beppu.

The original name for this place is 民宿こかげ (Minshuku Kokage). It’s a very old Japanese Inn with tons of priceless antique stuff inside. The owner opens this place to the public for those who want to see the collection he has gathered for the past years. Of course, you can book a room and stay there for several nights if you want to as well. Vintage lovers would fall in love with this place!

We were then taken to visit a very old house with tons of history in it, Ryoubunkaku. There we met the keeper, Akiyoshi-san, an old man who was once a dentist. He inherited the house from his parents (if I’m not wrong). This house is not open to the public, and Hirano-san also mentioned that we got really lucky because visitors was allowed on the day we went on the mini tour.

I wanted to take a lot of photos because, man, this house was majestic! It had a small garden behind and so many rooms with all the antique interior design. However, he scolded someone who took photos once, so I guess we’re not allowed to take any. Too bad.

The house had so many sliding doors connected to many different rooms. Each room had a history and drawing that shows us a lot about Beppu. One was used to predict the seasons and another one was a beautiful painting of a mountain in Beppu (which its name I forgot).  It also might sound funny, but this is the only house in Beppu that has swinging doors (like the one in the salon). A lot of poets who wrote haikus have come to this house a long time ago and you can still see their original piece of paper they wrote on being displayed inside the house.

Anyways, there are so many things you can discover in this house and me talking about it without pictures wouldn’t sound so interesting, so I will go to the next visiting spot.

I was wondering where we were heading after we got out of Ryobunkaku and it turns out that our tour guide brought us to a small alley where this sitting tree was located. I never knew that this tree existed, to be honest, but I found it really amusing. You can only see the tree ‘sitting’ from a certain angle.

We also went to several other places that I didn’t mention here because I forgot to take pictures of it. One of our last destinations was 海門寺温泉 (Kaimonji Onsen). Kaimon literally means ‘the sea gate’. It was named because the land was once a border between land and the sea. A humongous pine tree named Shigure Matsu grows here. You can see a short video I took of the tree in my Instagram if you’re interested.

The last place we were taken to was Hirano-san’s office. We were shown an old video about Beppu’s tourism and also encouraged by one of the teachers from our University to explore more about the city we’re living in right now. Hirano-san also encouraged everyone to apply as a helping tour guide if they’re willing to. I was quite interested, but I still feel I won’t be able to do much with my minimum level of Japanese right now. I do wish I can help around in the future, though!

This ends the mini tour around Beppu Station. I had so much fun and gained a lot of new knowledge that I wouldn’t have known if it weren’t for this program. If you’re interested in history and such, I think that participating in this kind of events wouldn’t be so bad!