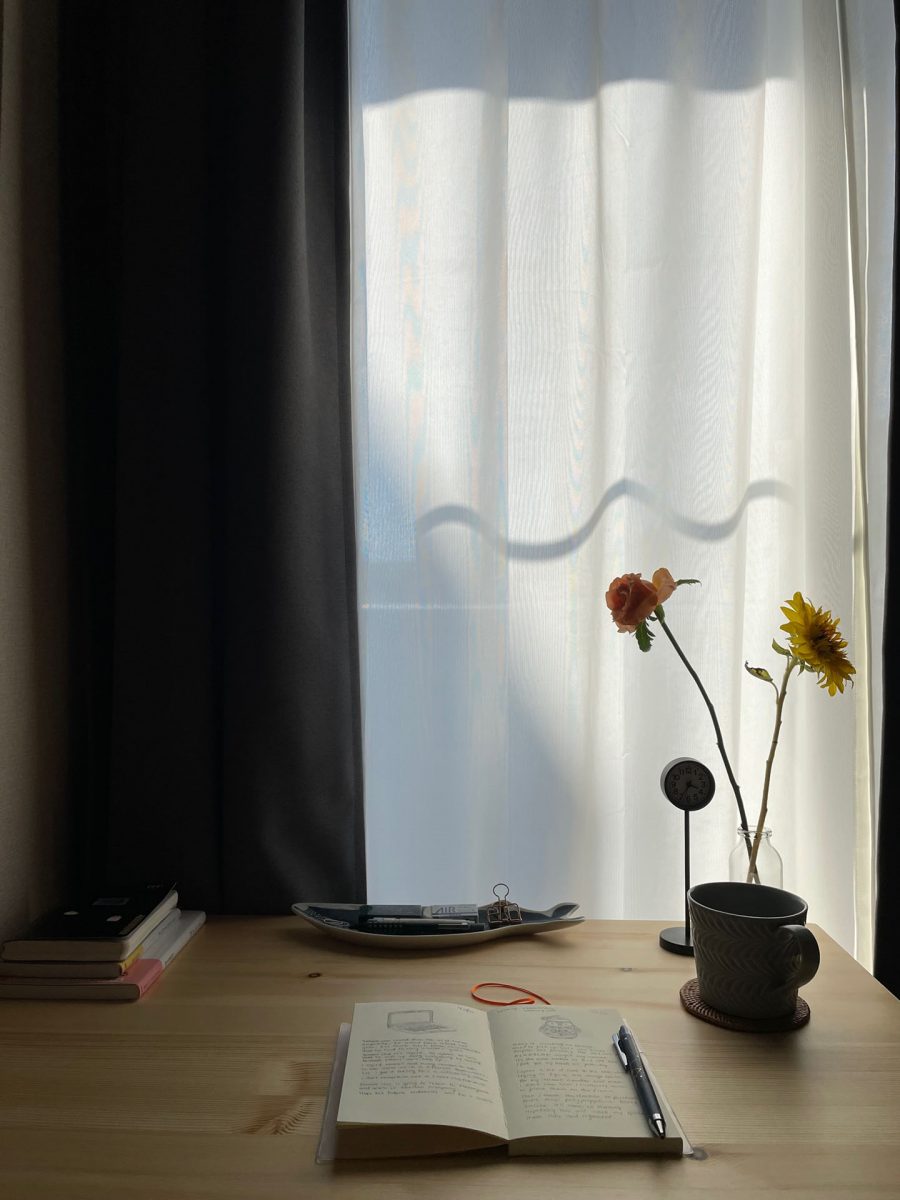 In the book Steal Like An Artist, the author recommended having two separate tables/areas for tech and analog stuff. I don’t remember the reason why. But recently, I’ve just been spending my weekends staring at my monitor with nothing much to do and I wanted to change that habit. I’d like to draw, but I have almost no space for my drawing books and painting is dangerous since I could get the colors everywhere. (My previous painting was done on the floor.) I’ve been feeling that my current table is too small recently and wanted to invest in another table and make my office space into an L shape. But it was impossible to find a same table with the same size but smaller width. (There was one in Ikea but shipping costs $200, so no thank you.) After days of searching, I finally remembered that Muji had released a small folding table in the past, so I checked their online store and found that their shipping was way more reasonable ($10), and decided to get one.

The table had some weight, a wonderful scent of wood, and was easy to ‘construct’. Being foldable is a plus point, since I could just store it away if I decided I need more open space one day. I put it by the window since I wanted more sunlight during the day. I placed my usual stationery tray, my bathroom clock, and some flowers I got recently. It became my favorite ‘corner’ in my room in an instant.

I’d love to get creative immediately but I haven’t ordered a cutting mat to protect the table, so playing with watercolors will have to wait. Instead, I’ve made some progress in reading recently. I’m still continuing Watashi no Utsukushii Niwa and now I have less than a hundred pages before I finish it. I’ve been reading it when I’m in the bus going home as it helps me kill time since I’m too sleepy and tired in the morning to use my brain cells to process kanji. Anyways, I’ve been enjoying this book more than I expected to. (Originally bought because of the pretty cover lol). I love the use of words and proses by the author and how well she fleshes out the characters in the book. It makes them feel real and it makes me feel a myriad of emotions that they felt. I’m also fascinated how 300 pages could fit a story about an orphan, a gay man, a woman who lost the love of her life, a man with depression, and a man that had to take in the child of his ex-wife (which is the orphan).

There’s one line that I really liked in the book spoken by Touri (the man who took in the orphan) to defend Rou (the gay man) from their friends who ‘apologized’ after distancing themselves from Rou because they found out he’s gay.

If you can’t understand, then that can’t be helped. Then you should shut up and just pass by. But you had to approach Rou and make excuses because you wanted to feel relieved by being forgiven, right? However, that guilty conscience is your baggage. If you’re going to hurt someone, you should at least bear that yourself.

I love the author’s writing, and I’m probably going to pick up her other works after I finish this one. 放浪の月 (The Wandering Moon) was one of her popular works which got adapted into a movie in Japan recently, so I’ll probably pick that up.

A short summer break is coming soon, so I’ll be drowning in movies and books while using my brand new desk to its fullest!